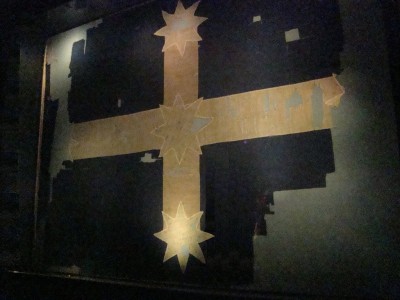 Objects Description
The Eureka Flag is made from wool and cotton. It was made in 1854. It consists of a dark blue field with a central white symmetric cross consisting five eight-pointed stars, representing the Crux constellation. The white cross behind the stars is Celtic. The design was first used in the Eureka Rebellion of 1854 at Ballarat in Victoria, Australia. Rebels swore an oath to the flag as a symbol of defiance at its first flying at Bakery Hill and 22 were killed at the Eureka Stockade defending the original flag now held at the Ballarat Fine Art Gallery. Dimensions: 2600mm wide x 3240mm high.

The flag design has gained wider notability due to its adoption in Australian culture as a symbol of democracy, protest and a wide variety of other causes. It is listed as an object of state heritage significance on the Victorian Heritage Register and was named as a Victorian Icon by the National Trust in 2006.

The flag was designed by Canadian miner “Captain” Henry Ross, a member of the Ballarat Reform League. With the central feature being the Southern Cross. Ross was inspired by the design of the Australian Federation Flagand incorporated the eight star cross which was a symbol of the Reform League. The flag was made by Anastasia Withers, Anne Duke and Anastasia Hayes, for a large rally at Bakery Hill on 29th November 1854. It was hoisted for the first time on Bakery Hill as a symbol of the resistance of the gold miners during the Eureka Stockade rebellion in 1854. Beneath this flag, Peter Lalor, leader of the Ballarat Reform League, swore: ‘We swear by the Southern Cross to stand truly by each other and fight to defend our rights and liberties’.

The flag was flown at the centre of the stockade fortification at the battle of the Eureka Stockade on 3rd December 1854. During the battle Henry Ross was mortally wounded near the flagpole. Following the battle, the flag was torn down and damaged with swords and bullets by troopers

Trooper John King souvenired the flag and it was held by his family until it was loaned to the Ballarat Art Gallery in 1895, where it remained with bits of the flag cut off and given to visiting dignitaries. Approximately 1/3 of the original flag is missing.

It was long suspected that the flag was a replica until the flag was compared with an authenticated fragment that been cut off on 3 December 1854 – the day the rebellion was suppressed. A comparison of the fibres of the fragment and matrix put the authenticity of the flag in the Gallery beyond doubt as they were found to be identical.

Since the original miners revolt at Eureka, the flag, born out of adversity, continues to be regarded by some as a symbol of nationalism, closely associated with this struggle for democracy.

Some Australian republicans have suggested the Eureka Flag design be among the options for an official redesign of the Flag of Australia to the electorate in a plebiscite.

The Eureka Flag is commonly used as a symbol of nationality, and radicalism. It is used by political groups and radicals as all round symbol of protest. The flag has been used as a symbol of left and right groups ranging from trades unions, nationalists, anti taxation lobbies, communists and neo-Nazis. The Roll Up Banner from the Lambing Flat anti Chinese riots was based the Eureka Flag. Because of this political connection the Eureka has developed a radical and racist connotation in the public view.

The Eureka Flag is historically significant as evidence of the growing movement agitating for fairness and universal democracy in 19th century Australia. The flag represents the oft mythologised notion of the Australian ‘fair go’ and the right of the individual over tyranny. It is also used as a nationalist symbol with often racist overtones representing a pro Anglo theme that has been ever current in Australian culture since 1788.