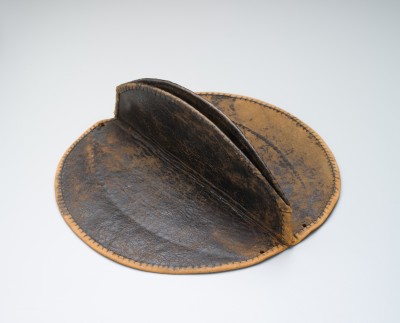 Object Description
Convict Cap made from leather in England for use in Australia, c.1850. Dimensions: 148mm high x 297mm wide.

A biconial leather convict cap that has flaps on both sides with a crown in between. The cap has ribbons at back and front tie the flaps together. 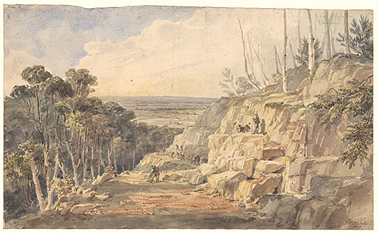 The convict cap has historical significance as a rare garment from the convict era. The cap was worn with the various convict uniforms, including the black and yellow type. The cap is evidence of the Colonial Government’s attitude to and treatment of convicts as indentured labourers in a strict social structure designed to provide cheap labour to build an expanding British global empire.

The convict cap has aesthetic significance in the design and function of penal garments from the early colonial era.

The convict cap is significant for researchers as it is one of the few existing convict caps from that time. Its design and manufacture make it a good example of a convict garment from early colonial Australia and Britain.

The cap has significant intangible significance being an iconic object and a symbol of one of Australia’s brutal convict origins and early settlement.

The cap is well provenanced and documented. It was donated to the Mitchell Library by Sir William Dixson and has been in the Mitchell collection ever since.

The convict cap is extremely rare. It is one of a few existing convict caps in public collections in Australia. It is also rare as a garment from early colonial Australia and Britain.

The object represents a time early in Australia’s history when the colony was exploring its new environment and beginning exploiting its resources. The cap also represents the coming of Europeans to Aboriginal Australia as it is instantly recognisable as a convict cap and a symbol of the British penal colony at and expansion from Sydney Cove. The cap is in excellent condition for its age and material.

The convict cap interprets the dependence of convict labour in the establishment, survival and expansion of the early colony at New South Wales. It also interprets the brutal convict origins of European Australia and the Government system.