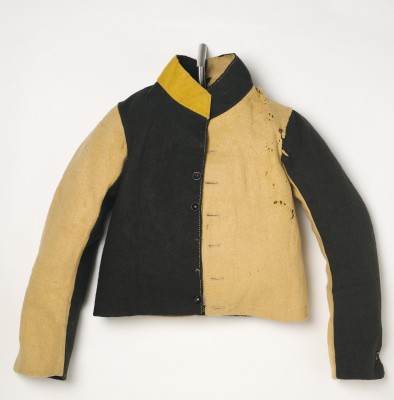 Object Description
Convict jacket of black and yellow felted wool known as a Magpie jacket made in England for use in Australia. Dimensions: 610mm long x 480mm wide.

The jacket is short with front buttons with three of the original six metal painted black buttons missing, a high stand-up collar, and a long, shaped sleeve with buttoned cuff. The torso, sleeve and collar are all particoloured and hand-stitched with linen thread. The inside right front is stamped in ink with the letters ‘WD’ for War Department. It carried the broad arrow pheon signifying government property. 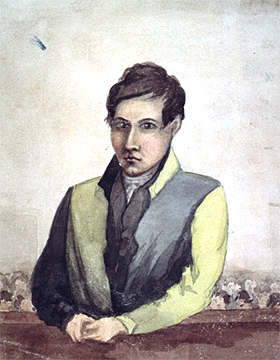 Portrait of a Convict, c.1840s. Courtesy Allport Library and Museum of Fine Arts

Between 1789 and 1791, the settlers at Sydney Cove were critically short of food. To make matters worse, the supply ship HMS Guardian was wrecked off South Africa before it reached the Colony, and HMS Sirius, one of two of the Colony’s Navy vessels, was wrecked on Norfolk Island en route to China seeking food. In desperation, the HMS Supply, the Colony’s second Navy ship, was sent to Indonesia for food. Hopes were raised when a vessel arrived in Port Jackson in 1790, but it was not the HMS Supply, but the Second Fleet of five ships carrying over 730 people. This Second Fleet was a disaster, with its human cargo severely abused and exploited by the private ship owners. Of 1000 convicts on board, 267 died and 480 were sick from scurvy, dysentery and fever. The supplies on board the Second Fleet were supposed to feed the convicts, but the ship owners withheld the supplies for sale until after the convicts disembarked. Phillip, enraged by this behaviour as he had to further ration existing supplies, became desperate to establish farms and a local economy. 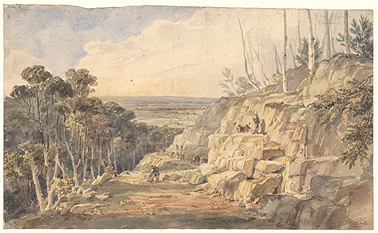 The convict jacket has historical significance as a rare garment from the convict era. The black and yellow colouring reveals the Colonial Government’s attitude to and treatment of convicts indentured labourers in a strict social structure designed to provide cheap labour to build an expanding British global empire.

The convict jacket has aesthetic significance in the design and function of penal garments from the early colonial era.

The convict jacket is significant for researchers as it is one of the few existing convict jackets from that time. Its design and manufacture make it a good example of a hand made convict garment from early colonial Australia and Britain.

The Jacket has intangible significance being an iconic object and a symbol of one of Australia’s brutal convict origins and early settlement.

The jacket is well provenanced and documented. It was donated to the Mitchell Library by Sir William Dixon and has been in the Mitchell collection ever since.

The convict jacket is extremely rare. It is one of a few existing convict jackets in public collections in Australia. It is also rare as a garment from early colonial Australia and Britain.

The object represents a time early in Australia’s history when the colony was still establishing itself and exploring its new environment. The jacket also represents the coming of Europeans to Aboriginal Australia as it is instantly recognisable as a convict jacket and a symbol of the British penal colony at and expansion from Sydney Cove. The jacket is in excellent condition for its age and material.

The convict jacket interprets the dependence of convict labour in the establishment, survival and expansion of the early colony at New South Wales. It also interprets the brutal convict origins of European Australia and the Government system.