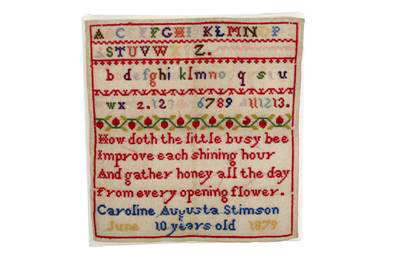 Object Description
Sampler, embroidered onto a linen base, with coloured wool threads outlining the alphabet in upper and lower case, the numbers 1 to 13, and four lines of verse: ‘How busy doth the bumble bee/ improve each shining hour/ and gather honey all the day/ from every opening flower’, Caroline Augusta stimsons/ 10 years old June 1879. Dimensions: 360 x 340 mm. Condition is good, with parts of the wool on a few of the letters and numbers is worn/missing.

Sydney International Exhibition bronze medal, round with a raised rim and legend with the inscription ‘Orta recens quam pura nites’ (Recently risen, how brightly you shine). Obverse depicts female figure in profile with right arm raised holding a laurel wreath and a shield with the New South Wales coat of arms in the left hand. Dimensions – 50 x 5 mm. 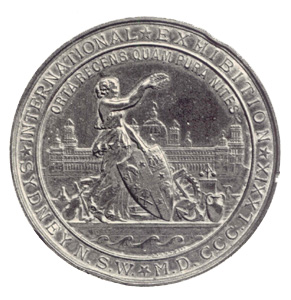 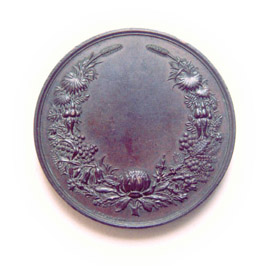 On 17th September 1879 Australia’s first international exhibition opened in Sydney to showcase raw and manufactured goods and industry from around the world. To house the exhibition, the Garden Palace was built in the Governor’s Domain, just south of the Government House Stables (now the Conservatorium of Music).[1] Alongside displays from twenty kingdoms, republics and colonies, Australia presented its products to the world for the first time. Large displays from New South Wales, Victoria and Queensland, were featured, and school children were given the chance to display their handiwork in the Sydney Juvenile Industrial Exhibition organised by the Council of Education.

Designed by Colonial Architect, James Barnet, the Garden Palace was a huge Victorian cruciform building with a central dome. The exhibition which included produce and manufactured goods brought from around the world, ran for roughly seven months and attracted over one million visitors, which represented over half the population of Australia at that time.

Leading up to the Exhibition, students at Old Guildford Public School, in Guildford in Sydney’s west, were working under the supervision of Mrs Cookson, wife of the school principal to produce needlework to display at the International Exhibition. Sisters from Fairfield’s pioneering Stimson family who attended the school, all created needlework to exhibit, including the detailed embroidery sampler produced by ten year-old Caroline Stimson. As a requirement of the school curriculum for young girls, the practice of embroidering alphabets and numerals in various styles was regarded as a desirable ability. A lady’s maid was always required to monogram household linen so that it could be assigned to the relevant owner’s chest of drawers. However with the shortage of servants and the colony’s dependence on imported materials for clothes, meant that nearly all colonial women were required to do some sewing[2]. By the beginning of the 20th century, the practice of schoolroom samplers had disappeared. 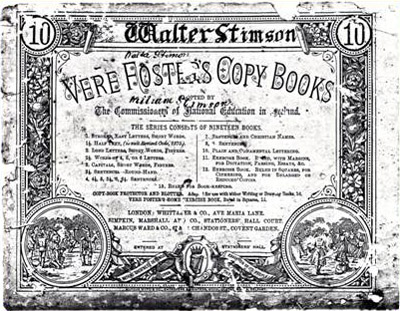 The syllabus included daily sessions in the needlework sampler for females over six days. The sampler’s or exampler’s purpose was to store on fabric, the needleworkers repertoire of stiches or techniques, usually in the form of a rectangular piece of linen fabric hand stitched with upper and lower case alphabets, numbers, figurative motifs and biblical or moral verses that was signed and dated by the maker.

Caroline Stimson’s sampler was shown amongst the work of hundreds of school children from Public Schools around New South Wales, organised by the Council of Education: ‘…the schools of the Colony contributed to the Garden Palace display numerous exhibits, chiefly of crayon drawings, maps, illuminations, and needlework, and the pupils of these schools secured between five to six hundred awards, bearing testimony to the general merit of their handiwork.[3]

Judging of the 14,000 exhibits began in early 1880 by 254 unpaid judges. They rewarded exhibits that showed ‘originality, invention, discovery, utility, quality, skill, workmanship, fitness for purpose intended, adaptation to public wants, economy and cost’.[4] Among the exhibits from around the world, 7554 awards were given out and the exhibitors were awarded medals and certificates.[5]

The Public Schools Exhibits were judged as part of the Educational Systems, Methods and Libraries Class, and 21 awards were given to children from Caroline’s school. Caroline’s sisters also won awards – Barbara (aged 5) and Grace (aged 5, probably a cousin), received Honourable Mentions, and Caroline (aged 10), Sarah (aged 7), Emma (aged 14) and Eliza (aged 16) were Commended by the judges.[6]

The official medal for the Sydney International Exhibition was designed by a Sydney craftsman named Samuel Begg, but later modified by English engravers J.S. and A.B. Wyon. On one side, a classical female figure personifies New South Wales, surrounded by artefacts of learning and advancement that were on display at the exhibition, including musical instruments, books, a pickaxe, a wheel, an anchor and ceramic ware.

The Garden Palace is depicted in the background, and above are the words Orta recens quam pura nites, which after 1879 became the motto of the State of New South Wales. The gold and silver medals were struck at the Sydney Branch of the Royal Mint, while the bronze medals were struck in London.[7] On the reverse side of the medal awarded to Caroline is a wreath of native Australian flowers, with a space in the centre for an inscription. However, Caroline’s medal was never inscribed with the details of her award.

Caroline Stimson was born in 1868[8] and lived with her parents and nine siblings in a grand Victorian mansion in Fairfield named Cambridge House, which for many decades was a local landmark. Caroline’s parents, William and Eliza Stimson had migrated to Sydney from England in 1849. Stimson first worked at Byrnes Timber Mill, and then bought land along the Dog Trap Road at Old Guildford, where Fairfield Road joins Woodville Road. William was one of the early pioneers of Fairfield who cleared the bush on his land and planted orchards, a vineyard and a market garden. The rapid development of small farms in the area created a demand for timber, and as much of Stimson’s land was heavily timbered, he established a sawmilling business at Fairfield near the railway yards.

William Stimson became the largest property owner in Fairfield. His business prospered to such an extent that in the late 1870s, he engaged Varney Parkes, son of Sir Henry Parkes, to design his home. Using the plans, Charles Furner of Camden, built Cambridge House in 1877-78 next to the railway station at the Crescent, Fairfield. The house had gables and iron lace balconies, and was set in an English style garden with English trees and a large pond crossed by a bridge and an elegant carriage drive. The family lived there for the next 20 years. 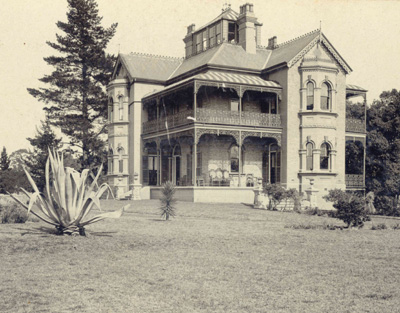 William Stimson concerned himself with the welfare and advancement of others and was elected to the first Council of Smithfield and Fairfield in 1888 and continued as Councillor until a few years before his death in 1902. William Stimson’s son Walter, also served as Mayor several times and another son George, was Mayor of Cabramatta-Canley Vale Council. The Stimson family was virtually a dynasty that provided the area with three generations of local government administrators and provided many houses with timber from their sawmills.

In the early 1970s Cambridge House became the centre of public debate when a proposal was submitted to make the house the centre of a new large-scale home unit development. Despite strong opposition from the National Trust and the public, the proposed development was given permission to proceed. Although an economic slump delayed the commencement of the development, a fire on the 15th February, 1975 destroyed the interior of the house, and the remains were demolished within a week.

The sampler and medal are historically significant as evidence of the migration of liberal entrepreneurs from Britain and the prosperity they achieved in 19th century NSW through hard work, chaste and piety.

The sampler and medallion has social significance as evidence of Victorian attitudes to the role of women. Early colonists were concerned with providing an appropriate elementary education for young females so that they could be equipped for the domestic roles that may be required of them. The interdenominational Irish National School system was adopted in New South Wales in 1848. It listed a table of minimum attainments for each child at each class level in each subject undertaken in programmed lessons which could be assessed against similar attainments completed by students in Dublin.

The sampler is provenanced to Caroline’s daughter Ethel Jean Lee (nee Furner) who donated it the the Museum. The bronze medal awarded for the sampler at the Sydney International Exhibition in 1879 is also on display in the Museum.

The sampler and medallion has interpretive significance as an example of how the role of children was melded by the education system so that they would fulfil their role in a settler community. The requirement for girls to learn such skills could be an issue to be considered by visiting school children when participating in schoolroom activities in the 1940s schoolroom at the Fairfield City Museum and Gallery.

The sampler and medallion has research value. The Powerhouse Museum has other examples of children’s work that was displayed in the Public Schools Section, at the Sydney International Exhibition of 1879. All the examples provide an insight into the priorities of education authorities in the late 19th century.

[6] Their surname ‘Stimson’ is misspelt as ‘Stinson’ in the Official Record of the Sydney International Exhibition, 1879, p. 377.