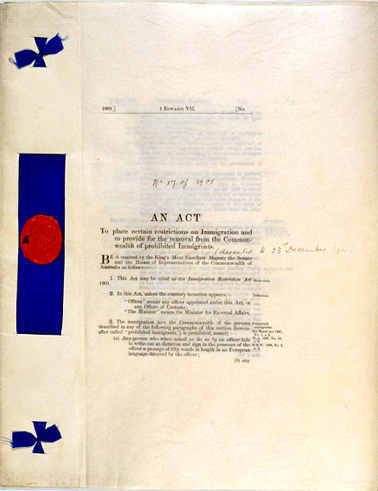 Object/Collection Description
An Act to place certain restrictions on Immigration and to provide for the removal from the Commonwealth of prohibited Immigrants (No.17 of 1901). Parchment, cotton and wax. Dimensions: 400mm long x 320mm wide. 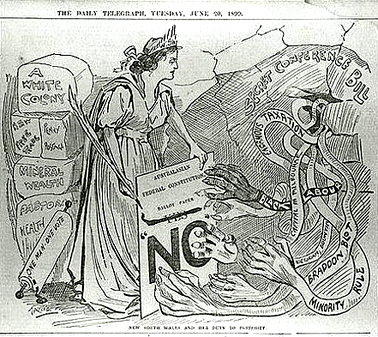 The Immigration Restriction Act was the key part of a package of legislation passed by the new Federal Parliament in 1901, aimed at excluding all non-European migrants. This package included the Pacific Islander Labourers Act and Section 15 of the 1901 Post and Telegraph Act, which provided that ships carrying Australian mails, and hence subsidised by the Commonwealth, should employ only white labour. Its sentiments were in line with Australian nationalism in the late 1880s and 1890s, and moves to restrict non-European immigration to most of the Australian colonies dating back to the 1850s.

The mechanism restricting immigration could not be overtly based on race as this was opposed by Britain and frowned upon by Britain’s ally, Japan. Instead, the basis was literacy, assessed by a Dictation Test. Similar Dictation Tests, based on legislation used in Natal in South Africa, had been introduced in Western Australia, New South Wales and Tasmania in the late 1890s.

The Immigration Restriction Act enabled the government to exclude any person who ‘when asked to do so by an officer fails to write out at dictation and sign in the presence of the officer, a passage of 50 words in length in a European language directed by the officer’. The Dictation Test could be administered to any migrant during the first year of residence.

It was initially proposed that the Test would be in English, but it was argued that this could discourage European migration and advantage Japanese people, and Americans of African descent. Instead, any ‘European language’ was specified. In 1905 this was changed to ‘any prescribed language’ to lessen offence to the Japanese. From 1932 the Test could be given during the first five years of residence, and any number of times.

The Act, frequently amended, remained in force until 1958.

This Immigration Restriction Act 1901 has historic value because it has direct links Federation and the drafting of the first Australian Constitution. This document put in place the law that was the cornerstone of Australia’s ‘White Australia’ policy. The Governor-General signed the document two days before Christmas Day 1901, a week after he had signed the Pacific Islander Labourers Act into law. Together with Section 15 of the 1901 Post and Telegraph Act, these formed a powerful set of legal instruments shaping immigration policy at the foundation of the Commonwealth. They continued to guide thinking on immigration for half a century.

The Immigration Restriction Act 1901 was drafted and passed in the House of Representatives in Federal Parliament in 1901. The document is in the National Archives of Australia collection.

The Immigration Restriction Act 1901 is rare as it is one of the few objects directly associated with the drafting of the first Australian Constitution.

The Immigration Restriction Act 1901 represents the formal adoption by Commonwealth of Australia of racist policies that resulted in form immigration apartheid that grew out of racist 19th century community attitudes.

The Immigration Restriction Act 1901 is in excellent condition.

The Immigration Restriction Act 1901 has the potential to interpret the main themes of Federation. This is namely the drafting of the Federal Constitution that governed immigration, customs, defence, trade, taxation and finance and industrial relations and the creation of a new Australian nation in 1901. The document has the potential to interpret the racist attitudes to Asians and Pacific Islanders and the subsequent laws and polices adopted by the Federal government to restrict these groups to migration and work in Australia.