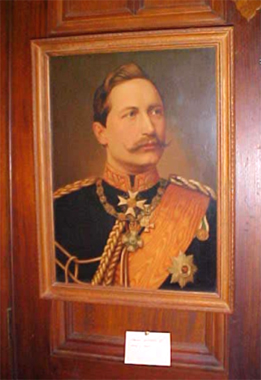 Object Description
Framed colour prints of Wilhelm II and Empress Augusta Victoria of Germany Circa late 19th to early 20th century. The print is a framed colour lithograph or chromolithographic print on paper. The print and frame are both in good original condition. Dimensions unknown.

The lithographic printing process was invented by Alois Senefelder in Bohemia in 1798. It was the first new printing process since the invention of relief printing in the fifteenth century. In the earliest days of lithography a smooth piece of limestone was used, which gives the name of the process, lithography, from the ancient Greek word ‘lithos’ meaning stone. Separate stones were used for each colour, with gum arabic supplying resist areas in opposition to the acid etched and ink laden ‘positive’ areas, which supplied the image. 1 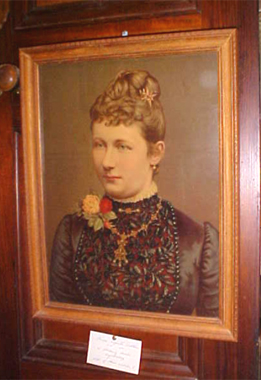 Kaiser Wilhelm II was born in 1859, Wilhelm was the eldest son of Crown Prince Frederick William of Prussia and Princess Victoria, the eldest daughter of Queen Victoria and Prince Albert of England. Handicapped from birth with a withered left arm, Wilhelm’s childhood was dominated by a strict learning regime imposed by his strong minded mother and reinforced by tutors and his time spent at the grammar school in Kassel.3

After finishing school at Kassel in 1877, Wilhelm was attached to the 1st Guards Regiment as a lieutenant. His term of duty lasted for six months and he relished every moment. The process of education however, was not yet complete and he was sent on to the University of Bonn. There Wilhelm read law and national economics. After his time at Bonn, Wilhelm returned to his military career. It was during this period that he developed a growing attachment to Prince Bismarck. 4

In 1879 Wilhelm began to court Princess Augusta Victoria, the daughter of Duke Frederick von Schleswig-Holstein. Wilhelm and Victoria were married on 27th February, 1881. 5

Germany at the time of Wilhelm’s birth was a collection of separate states, some more industrially advanced than others. These states were combined under the crown of Prussia in 1871 to form Germany, with Prince Bismarck as its chancellor. The seizing of the two frontier provinces of Alsace and Lorraine however, left the French with a desire for revenge. 6

Bismarck sought to achieve a lasting peace in Europe by aligning Germany with a former enemy, the empire of Austro-Hungary. This formed the ‘Dual Alliance’ to counter the growing power of Russia. 7

The German Empire (Reich) was the industrial giant of Europe. In 1900 Germany possessed the world’s most modern army and announced plans to build 38 battleships over the next 20 years, to protect its overseas colonies. This was the first time in a century that any country had attempted to challenge Britain’s naval supremacy. These plans forced Britain to address European political matters and they briefly thought of forming an alliance with Germany. Kaiser Wilhelm II was not impressed with the idea. 8 In 1911, Germany sent a gunboat to the Moroccan port of Agadir to provoke France. This act resulted in a closer defence agreement between Britain and France. Europe was a hotbed of political unrest and Socialism was a rising force and in England, France and Germany a war was seen as inevitable. 9

Bismarck had once predicted that a war would result from ‘some damn foolish thing in the Balkans’. In 1912 Serbia, Bulgaria, Greece and Montenegro declared war on Turkey. Turkey was left with little more than the area around Constantinople and the Dardanelles. In 1913 the Great Powers called a conference in London to arbitrate peace and a new buffer state, Albania, was created. As 1914 dawned the whole of Europe hoped that peace had come at last, unfortunately, this was not the case. 10

A telegram announcing Britain’s declaration of war against Germany was received in Melbourne in the early hours of 5 August 1914. Australia, as part of the British Empire, was also at war. 12

At the conclusion of World War I in 1918, Wilhelm II and the Empress Augusta were forced into exile. For over five hundred years a member of Wilhelm’s family, the Hohenzollern’s, had ruled in Germany. ‘Now it was all over. The descendent of Frederick the Great was waiting on a rain-drenched railway platform in Holland, watched uneasily by Dutch frontier guards. Germany was now a republic, governed by the Social Democrats and the Catholic Centre. Nobody mourned the absence of poor Wilhelm.’ 13

The framed print of Kaiser Wilhelm II is associated with the second phase of German settlement in the Riverina and the establishment of communities, with the building of homes and business premises being an important part of the growth of towns. The furnishing and interior design of these homes also reflected the relative prosperity of individuals and families in the German communities.

The print also has important associations with notions of heritage, homesickness and family and friends left behind in Germany. For the German families of the Riverina the print also has links to community expectations, patriotism and prejudice during times of war, in particular World War I.

The print is linked to internment as it was Government policy that if people of German descent had the image of a foreign ruler displayed in their buildings they were deemed hostile to the Australian Government and could be arrested and interned.

……..it is considered that the internment of one or two of the most active or aggressive of the dis-loyal (sic) residents of German descent in the various localities in the Riverina would have a good effect on the others. This policy was followed in Queensland and South Australia with good effect. Any person of German descent who has the Kaiser’s picture on the walls of his house may be considered as anti-British. 14

Chromolithography was a popular method of reproducing colour prints at a relatively low cost during the latter part of the 19th century. It was particularly popular for the mass reproduction of religious images and portraits of well known public figures of that period.

This chromolithographic print of Kaiser Wilhelm II is significant for its associations with World War I and the surveillance and internment of members of the German community in the Riverina. It is an example of a mass produced, colour lithographic print from the late nineteenth century. This printing method was a cheap and efficient method for the mass production of advertising images, religious imagery and images of public figures of that period, including heads of state and military leaders.

The Kaiser Wilhelm II print is a tangible link to the political climate on the Australian home-front during World War I. It provides a tangible link to the often hysterical reactions among the wider population of Australia at that time towards people of German decent and their perceived threat to Australian society and the war effort. These adverse reactions often resulted in the surveillance, persecution and internment of people born in Germany or of German descent.

The print is an important object in the interpretation of themes concerning German migration, World War I, the Australian home-front and internment.