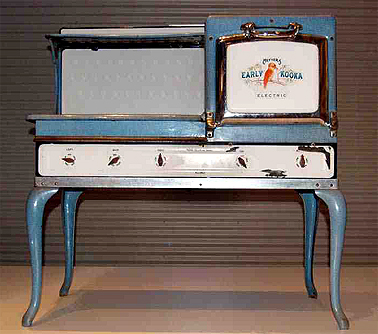 Object/Collection Description
The Ceccato Metters Early Kooka Stove is a symbol of achievement. The 1928 Metters’ Early Kooka stove was placed in Taylor’s Store at Pioneer Park, and then was the first exhibit item to go into the new Italian Cultural Museum. Soon after, vandals removed its door, yet it is important – not as a piece of kitchen technology – but as a symbol of achievement for its donor, Elizabetta Ceccato, one of Griffith’s earliest Italian settlers. She cherished it and polished its chrome it during its working life, and particularly wished it to come to Pioneer Park after her death. Elizabetta (b1892) arrived in Griffith in 1918, from Italy via Broken Hill, to join her husband, Giovanni Ceccato (b1882) on Farm 219, Hanwood – on the boundaries of Bagtown. They were both from Treviso Cavaso, between Piavi (Piave) and Triente (Trento). They were the first settlers from the Treviso Province and were to remain here for the rest of their lives. For Giovanni it was the end of a peripatetic lifestyle.

From the age of ten, in 1892, to the age of 28, he followed his father and brothers to Brazil, Switzerland, Germany, California, Alaska and the Canadian Klondike, working to support the family back in Italy and probably seeking fame and fortune, with intermittent returns to the homeland. In 1910 he and a friend returned to Italy to marry their sweethearts, but in 1912 Giovanni was off again to Australia and the mines of Broken Hill, where Elizabetta and their eldest child joined him in 1914. His children’s names bear witness to these travels – Alaska, Alasko, Florida – even Adolfo named after a ship he travelled on the Adolphus.

By the time Elizabetta (Elisabetta), now with four children, arrived in Hanwood, Giovanni had planted the previously undeveloped farm with a variety of fruit trees. The family’s early years there were tough. Although they had been able to afford to purchase their own farm, this meant that what little support was offered to assisted settlers was unavailable to them. Elizabetta looked after the yet-to-be-fruitful trees, with a part time assistant, while Giovanni earned their living as a bricklayer in town. They lived in a galvanised iron shed with dirt floor.

The death of the then baby of the family of gastro enteritis in 1919 is symptomatic of the conditions under which they lived and is emblazoned on their memories – daughter Licia, who was not born until 1928, could describe it graphically. It was late summer – the sun was pinging on the tin roof – Elizabetta had a terrible toothache and the baby in his box cot had uncontrollable diarrhoea. He kept getting weaker and Elizabetta ran out of rags to clean up the mess. Finally when the baby’s eyes began to turn back, she picked him up and began to run across the paddocks towards Dr Watkins surgery near the C.S.I.R.O., calling for help in what little English she could muster, but there was no-one to hear. The baby died in her arms on her way there.

In time, however, the family’s policy of growing a bit of everything to hedge their bets began to pay off. In 1923 they were able to build a cement rendered house. Giovanni made his own mould for the concrete cavity bricks, and Elizabetta and eldest daughter, Alaska, helped him make them. In 1927 they purchased a new Chevrolet truck, the first Italian family to do so. It wasn’t just a work vehicle, but also allowed more social contact, including occasional picnic trips to the river at Darlington Point, with their own and other families perched on boxes on the back. A telephone came around the same time, at first through the Hanwood exchange, and in 1932, a radio – Licia recalls the radio room full of people listening to coverage of the opening of the Harbour Bridge.

The Metters’ Kooka stove was bought second hand in 1932-33, to sit alongside the earlier wood stove – a source of personal pride for Elizabetta and a terrific cooker of baked potatoes. Since the subject of food was raised, Robyn Oliver had asked Licia about other food they ate as a child. She recalled pasta being forced by a screw through holes at the end of a three-foot long brass tube and hung on bamboo poles to dry. While they only ate a full pasta meal once a month or so, the pasta appeared daily in the soup her mother made from shin of beef and vegetables. The soup was flavoured with tomato concentrate, also made on the farm. The tomatoes went through a home made mincer, from which the juice was collected, boiled, cooled, strained and left in the sun to turn into a stiff paste. It was stored in Agee jars with a little olive oil on top to keep air out and used to flavour lots of dishes. Ricotta was made with the last of the whey, after the butter and cheese.

Possibly one of the ironies of life for the Ceccatos, when things were at their most difficult in the late 1910s and into the 20s, was that their “success” attracted a chain of other immigrants from the Treviso area to their doorstep. As Licia explained it, her mother was writing back home telling the family everything was “fine”, so as not to worry them. The letters were passed around and young men looking for work noted down the address, named Giovanni as their Australian referee, and arrived unexpectedly at the tin shed home looking for work. Since the men had no money and nowhere else to go, the Ceccatos let them stay and offered what help they could until they found their feet. All but one of the Elizabetta and Giovanni Ceccato’s nine surviving children remained in Griffith, to become leading members of the community; their drive and initiative has been passed onto further generations. When people look at the stove, I would like them to see beyond the chrome and enamel to the human struggle behind it, fought not just by the Ceccatos, but typical of so many of the irrigation pioneers.

This stove is of historic significance as a symbol of achievement, reflecting a high point in the early struggles of an economically impoverished migrant family.

This stove, which contains an emblematic Australian motif on its oven door, is a manufacture item of moderate aesthetic value.

The stove has some research significance as part of the history of kitchen technology in Australia.

The stove has symbolic significance in representing the early achievements and economic consolidation of Italian migrant communities in Australia. It has high social significance to descendants of the Ceccato family.

The provenance of the Metters Early Kooka stove is well established.

The stove is representative of early twentieth century kitchen technology.

The stove is not a rare item, as it is typical of many early twentieth century kitchens.

The slightly worn condition of the stove shows evidence of use, but overall the stove has been very well kept. After display, the oven door was removed by vandals and was replaced with a matching original.

This stove has interpretive potential as an example of an early twentieth century home appliance technology.