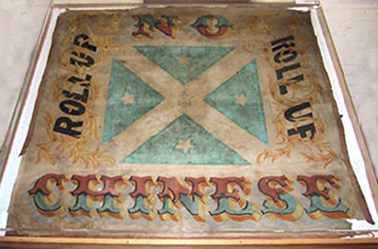 Object/Collection Description
A cloth banner with a hand painted Southern Cross emblem. Around the perimeter is painted the slogan ‘Roll Up, Roll Up, No Chinese’. The banner is made of white cotton with yellow, red and blue paint. The banner was originally trimmed with lace and tied with red and green ribbon, but the lace and ribbons are now gone. It is aged with yellow foxing and possible water marks. It was painted over 130 years ago and is one of the oldest banners in the history of Australia. It is in a very fragile condition. Dimensions: Approx 1200mm wide, 1200mm high and 2mm deep.

The discovery of gold in New South Wales from the early 1850s saw a huge influx of migrants in search of instant wealth. The primary result of the gold rush was that the economy boomed and for a short time gold outstripped wool as the Colony’s primary export. Many of the people who came in search of gold were Chinese men. Drawn from their home villages mainly in Kwangtung Province by the first gold rushes in Victoria, California and New south Wales in the 1850s they usually arrived in organised groups of 30 -100 men. In 1861 there were about 13,000 Chinese in New south Wales with the majority 12,200 on the gold fields. Throughout the 19th century Chinese arrivals continued to the regions of New south Wales associated with mining, replacing those who had returned home or left for opportunities elsewhere.

The Chinese diggers moved from goldfield to goldfield within New south Wales and across the border. Constantly on the move, their presence and experience are evidenced mainly from the observations and interpretations of Europeans, from archaeological digs and from objects saved by families and community members. There are few written accounts and sources from a Chinese perspective. The Chinese attracted particular attention and local newspapers were quick to comment on their distinctive features, clothes, languages and habits – especially their tendency to travel en masse, their methods of transport, their diligence, tirelessness and productivity. Any admiration of their work ethic was offset by envy and resentment when times got hard. The Chinese were often scapegoated by disgruntled European miners as seen in the violent anti -Chinese riots at Turon (1853), Meroo (1854) Rocky River (1856) Tambaroora (1858) Lambing Flat, Kiandra and Nundle (1860 and 1861) and Tingha tin fields (1870). They were seen initially as oddities, later as rivals and then as threats to white Australia. 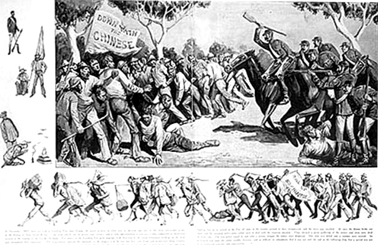 A report in mid 1861 that 1,500 Chinese had landed in Sydney bound for Lambing Flat, in central New south Wales, alarmed many miners who were doing it tough and saw the Chinese as a threat to their prosperity. With no troopers stationed at Lambing Flat to control the situation, the miners formed into a large a mob with the call ‘roll up’. In June 1861, the worst anti-Chinese riots in Australian history occurred at Lambing Flat that resounded throughout Australian political and cultural history. Three thousand miners amassed to move the Chinese off the goldfield. A militant mob took over the meeting of miners assembled at All and Ale pub at Tipperary Gully. The drunken mob headed by a brass band then began the march to Lambing Flat, with two men carrying the banner at the front of the procession.

On reaching Lambing Flat, the procession made for the Chinese camp. The mob set upon the Chinese, assaulting them, while their pigtails were cut off. The Chinese miners’ tents, clothing and furniture were set on fire and their mining tools destroyed. The procession moved on to the Back Creek Chinese camp five miles further on, and again carried out assaults and damaged tents and mining equipment. The Lambing Flat Miner newspaper, estimated the value of property destroyed at 3000 pounds. When all had been destroyed, the band formed up and the procession headed back to camp. 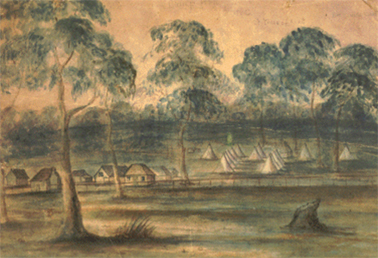 The Government of New south Wales on February 25 dispatched a contingent of troopers comprising cavalry, 20 mounted police escort for artillery with three 12 pounder field guns and 130 men of the 12th Regiment of Foot under Captain Atkinson. The troops arrived on Monday 11th of May. They set up quarters on Camp Hill, erected buildings and dug trenches and fortifications at the corner of Campbell and Berthong Streets from which their guns were trained over the town.

The Premier of New South Wales, Hon Charles Cowper, left Sydney for Burrangong to inquire into the position arriving on Saturday, March 2. The Miners’ Protective League had been formed at a meeting of 80 miners on January 31. It published its aims as the expulsion of the Chinese, its leaders asserted that the Chinese wasted water which was very precious on the field and cost sixpence per bucket when the creek was dry. The leaders offered an address to the Premier but permission was refused after he had examined its contents.

The Premier moved freely without escort among the miners, addressing meetings but refused to recognise their leaders. He said that his Government favoured restriction of the Chinese, but affirmed they must not be injured in person or property. He explained that the Government was bound both by the decisions of the Legislative Council and Britain’s treaty with China which admitted Chinese to British territories with secured privileges. 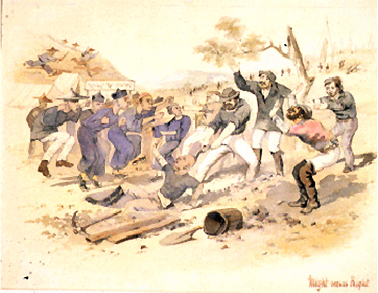 The banner used in the riot created a symbol that began to crystallise the ideologies of racism, nationalism and exclusive egalitarianism in a conceptual process that would manifest itself in the New south Wales Chinese Immigration Act of 1861 and later the Federal Immigration Restriction Act of 1901.

The banner’s historic significance lies in its relationship to the themes of the gold rush experience, racial antagonism, the fear of the exotic and unknown, and exclusive ideologies that fostered racially discriminative trade unionism and the development of Colonial policies culminating in the first act of the newly Federated Commonwealth of Australia, the Immigration Restriction Act 1901.

The banner has aesthetic significance in the design, language and the appropriation of the Southern Cross emblem as a symbol of racially exclusive working class rights and trade union solidarity in nineteenth century Australia. This symbolism and language has persisted into contemporary labour movement culture. The Southern Cross emblem, like the Australian flag, is also often used in times of perceived crisis by extreme right wing racist political groups.

The banner provides a research tool for historians to explore the culture and politics of the Europeans and Chinese on the gold fields. Objects such as the banner have already provided invaluable evidence for the Golden Threads Project exploring the experiences and world of the Chinese communities in 19th century regional NSW. The banner is evidence of the European suspicions of the closed culture of the Chinese on the gold fields that ironically prompted the further forced isolation on the diggings. The myths created about the economic competition of the Chinese on the diggings, symbolised by the Southern Cross emblem were to form the basis of hysterical racial slurs against the Chinese in order to drive them off of the diggings. These myths later provided the basis for the racist logic of the 1901 Immigration Restriction Acts.

The banner has an intangible significance to Chinese communities to recognise and acknowledge the violence and racism dished out to their ancestors. Objects and collections from Chinese communities provide the material culture for the stories of ancestors. These objects and collections have a resonance across regional New south Wales and Australia.

The banner is rare because it was made for a specific purpose and event. Other banners and flags include the Southern Cross flag of the Eureka Rebellion at Ballarat Vic in 1854.

The condition of the object is good given the rarity and fragile nature of the fabric. There is evidence of some fading and tears around the edges. It is significant that such an object remain in good condition, intact and in the region it has an historical association with.

The banner is a powerful interpretive tool in communicating the experience and the treatment of the Chinese on the diggings. It also provides evidence on the history of the relationship between China and the West in general.