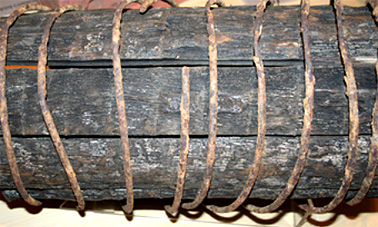 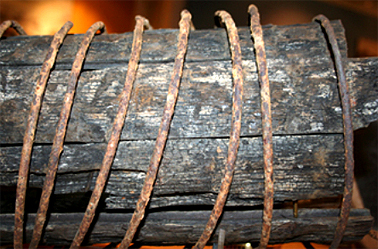 Australia is dry land. Aboriginal people have valued and cared for the streams and water holes for millennia. Water has been vital to the survival and prosperity of Sydney since 1788. The need to ensure a reliable water supply through times of drought and fluctuating rainfalls has been central to the development of several complex and innovative water supply schemes. 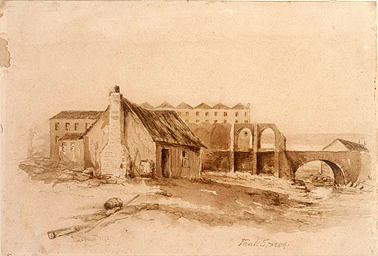 Sydney’s original water supply came from the Tank Stream named for the ‘tanks’ or reservoirs cut into its sides to save water. The stream, which wound its way from Hyde Park, along Pitt St to Sydney Cove, soon became too polluted to use and was abandoned in 1826. 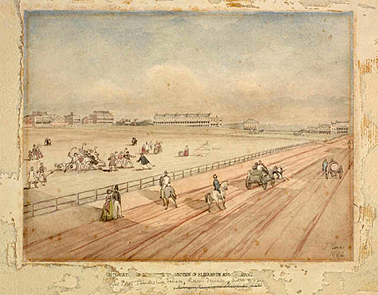 James Busby then established a bore and a four kilometre tunnel from the Lachlan Swamps, (now Centennial Park) to the south eastern corner of Hyde Park.

By 1852 drought and increasing population led to the call for a more permanent water supply for Sydney. A third water source, the Botany Swamps Scheme was established 1859. But within 20 years, the once plentiful supply of fresh water was depleted.

The innovative Upper Nepean Scheme was Sydney’s fourth source of water supply. Completed in 1888, the scheme diverted water from the Cataract, Cordeaux, Avon and Nepean rivers to Prospect Reservoir via 64 kilometres of tunnels, canals and aqueducts known collectively as the Upper Canal.

The Upper Nepean Scheme bought only temporary relief to Sydney’s water supply consumption. The drought of 1901-1902 brought Sydney perilously close to a complete lack of water. After two Royal Commissions into Sydney’s water supply, the authorities agreed that a dam be built on Cataract River. The successive building of Cataract, Cordeaux, Avon and Nepean dams between 1907 and 1935 greatly improved the Upper Nepean Scheme’s capacity.

Meanwhile, a scheme to supply water from the Woronora River to Sutherland and Cronulla in Sydney’s south was resurrected. Construction of Woronora Dam began in 1927 and was completed in 1941.

The potential of Warragamba as an important site for a major dam was identified as early as 1845, but plans were deferred during the construction of the Upper Nepean dams. The ever increasing demand for water, combined with a severe drought the lasted from 1934 to 1942, forced the development of Warragamba Dam to ensure a reliable water supply. Construction of Warragamba Dam commenced in 1948 and was completed in 1960. The dam was built by post World War Two migrants who eventually settled in the Liverpool area.

The plan to develop a water supply system in the Shoalhaven was first mooted at the end of World War One. It was not until fifty years later, in 1968, that the then Water Board consulted the Snowy Mountains Hydro-Electric Authority about the longer term water needs of Sydney and the south coast. There was concern that Warragamba Dam, which had opened only eight years earlier, might prove inadequate to meet Sydney’s water supply needs by the mid 1970s.

The advice was to proceed with the Shoalhaven Scheme – situated in the lower Shoalhaven River and Kangaroo Valley areas – on the coastal range above Fitzroy Falls and on the Upper Wingecarribee River. Construction began in 1971 and was carried out by contractors under the supervision of the Snowy Mountains Engineering Corporation. The Scheme was completed in 1977 at a final cost of $128 million.

Piped water was laid on at Liverpool in 1893 during the development of the Upper Nepean phase of water supply. The water was pumped from Prospect Reservoir in cast iron pipes so the laying and use of wood staved pipe in Flowerdale Road Liverpool is a mystery. It was probably laid in the 1880 prior to the introduction of town water to service the market gardens in the area prior to establishment the cemetery in 1892. 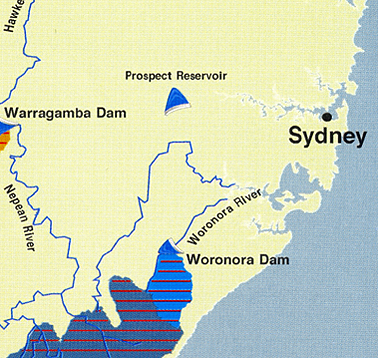 Similar pipes have been unearthed in other parts of Sydney and the Southern Highlands and these remain largely a mystery along with the Liverpool one.

A Wingecarribee Shire Council road crew unearthed wooden water pipes in 2006 when doing some excavations along Suttor Road in Moss Vale, Australia. They were able to carefully dig out a length that included two intact collars about eighteen feet apart in an almost perfectly preserved section.

Council records show that when the original Moss Vale water supply began pumping water up to town from the Bong Bong reservoir in 1894, there were around six miles of reticulation pipes of 6, 4 and 3 inch diameter laid around the main streets of Moss Vale. These were cast iron pipes, so the use of wooden pipes remains a mystery.

This section of pipe is bound in a wire that hasn’t rusted and seems to have been treated with bitumen. Council workers have dug up wooden pipes before, particularly in Bowral around Merrigang Street and also in other parts of Moss Vale.

Two similar wooden water pipes on display at the Corowa Museum were apparently used at Corowa for the town water supply in the late nineteenth century. Like the one from Liverpool and Wingecarribee, they are made with joining sections of wood that and are bound together with wire. 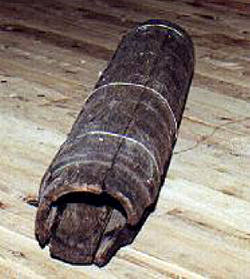 The wood staved pipe has historical Significance as evidence of the development of water supply technologies and the introduction of essential infrastructure to Sydney suburbs. The water pipe also has historical significance as evidence of colonial building materials and practices, Liverpool’s 2nd phase of development and links to local families and local government.

The wood staved pipe has aesthetic significance in the design and manufacture of Victorian building materials, bores, tunnels and pipes.

The wood staved pipe is significant for further research as one of the few existing in Australian public collections.

The wood staved pipe is provenanced to Flowerdale Road, Liverpool and was acquired by the Liverpool Regional Museum in the 1990s.

The wood staved pipe interprets the exploration and expansion of the early colony at New South Wales into the 2nd phase of colonial development in the late 19th century. It also interprets the history of development of Sydney’s water supply infrastructure. The wood staved pipe has the potential to interpret the building and water carrying methods used at the time in the construction of many of the Victorian buildings in Sydney.