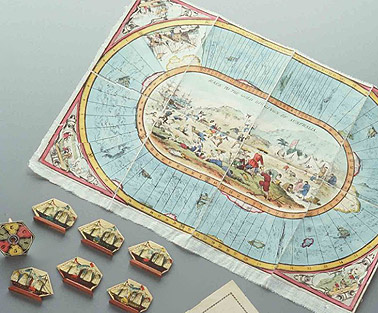 Race to the gold diggings of Australia board game c. 1850-1869. Courtesy of the Powerhouse Museum

Object Name
Race to the gold diggings of Australia board game

Board game, Race to the gold diggings of Australia , linen/ wood/ paper, England, 1850–1869. A boxed children’s board game. The game board consists of a hand-coloured lithograph mounted on linen, with a printed rule card, six painted ship pieces with stands, and a cardboard teetotum, all contained in its original wooden case with illustrated lid. Players move around an oval track representing the sea voyage from Britain to Australia. The centre is a scene of miners at the gold fields and in each corner small vignettes depict travels, success on the diggings and bags of gold. The illustration on the box lid shows ships ‘Passing the Cape of Good Hope ‘. Dimensions: 495mm w x 330mm long. 1

Although there were some remarkable discoveries on the gold fields, few people made their fortune and most drifted back to towns and cities looking for work. Some of the immigrants returned to their countries of origin but the majority stayed. Australia ‘s first gold rush transformed the colonies. Convict transportation to the eastern colonies ceased, the population more than doubled, agriculture expanded and new industries were established.

In these circumstances it is not surprising that the 1850s obsession with making a fortune at the diggings found its way into children’s games such as the Race to the gold diggings of Australia. The detailed colour illustrations reveal contemporary attitudes to the Australian gold rush. A circular track on the board simulates the journey by sea from England to Australia. Players must embark at Plymouth, make the hazardous ocean voyage, land at Port Philip [sic] and journey to the diggings. The winner is the first to arrive in Australia. Naturally there are large gold nuggets to be found as soon as the happy immigrants set foot on land. It is interesting that the miners’ clothing suggests that they have come from many parts of the world, not just England. The board shows prospectors digging while women and children gather outside their tents. Ships are anchored in a nearby bay, a stone’s throw from the gold diggings.

At the time this game was produced, board games generally had a moralistic slant, emphasising the virtues of hard work, thrift and economy. With its emphasis on instant wealth in a far off land, this game runs counter to that trend, providing children with a graphic reminder of the excitement and avarice that the Australian gold rush inspired. 2

The game has historical significance as evidence of the romantic depiction of the voyage to Australia and the prospect of instant wealth that lured migrants to the colonies. It also reveals the limited understanding hopeful diggers had of Australia’s geography.

The game is in excellent condition

The game has considerable interpretive potential. The Race to the gold diggings of Australia board game is a rare example of the movable heritage of the first Australian gold rushes, an event that transformed colonial society and laid the foundation of modern Australia.