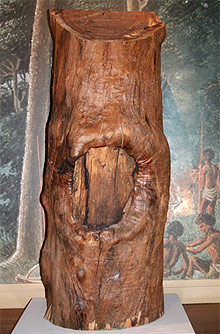 Object Description
Tree trunk of eucalyptus tree from the Liverpool area with a large ‘scar’ that has resulted by the cutting out of the outer bark layer for making a canoe or other purposes. C. 1840-50s. Dimensions: 1000mm long x 220mm wide.

In 1779, Joseph Banks, the botanist who had travelled with Cook to New South Wales, suggested Australia as an alternative place for transportation. The proposal was repeated later by James Matra, who had also sailed on the Endeavour. The advantages of trade with Asia and the Pacific were also raised, alongside the opportunity New South Wales offered as a new home for the American loyalists who had supported Britain in the War of Independence. Eventually the British Government settled (although not without criticism) on Botany Bay as the site for a colony. Secretary of State, Lord Sydney, chose Captain Arthur Phillip of the Royal Navy to lead the fleet there and to be the first governor.

Before his departure for New South Wales, Phillip received his Instructions (composed by Lord Sydney) from King George III, ‘with the advice of his Privy Council’. The first Instructions included Phillip’s Commission as Captain-General and Governor-in-Chief of New South Wales, designates the territory of New South Wales as including ‘all the islands adjacent in the Pacific Ocean’ and running westward to the 135th meridian, that is, about mid-way through the continent.

Phillip’s instructions had specific guidelines regarding managing the convicts, granting and cultivating the land, and exploring the country. The Aboriginal peoples’ lives and livelihoods were to be protected and friendly relations with them encouraged, but the Instructions make no mention of protecting or even recognising their lands. It was assumed that Australia was ‘terra nullius’, that is, land belonging to no one. This assumption shaped land law and occupation for more than 200 years and overrides the prior usage and cultural significance of Aboriginal peoples.

Sydney has many sites that are sacred to Aboriginal people. This tree highlights the significance of these sites and the Indigenous history of the local Liverpool area.

Scars on trees occur for a number of reasons. This includes taking the bark to make canoes and coolamons. Marking out a boundary area, marking a sacred burial site or indicating traditional women’s and men’s sites are also things which may create a scar tree.

There are many Aboriginal scar trees surviving. Most of them are in the rural areas surrounding the city and suburbs, but many still exist in the urban areas. The tree must be an endemic species to the region. If the tree is not a naturally occurring species, then the scar, no matter how genuine it may look, is almost certainly not of authentic Aboriginal origin. It is extremely difficult to accurately age eucalyptus trees, so age estimates, scars are usually guess work. A point to remember, though, is that the tree bearing the scar would almost always have been mature when the bark was removed and therefore of a fairly large size.

The scar tree is historically significant as it defines Aboriginal occupation of Australia prior to 1788 and challenges Britain’s claim over it – land that Aboriginal peoples had lived in for over 40,000 years. It challenges the concept of ‘terra nullius’ that would be the foundation for the dispossession of Aboriginal homeland and pre-empt European settlement of the continent.

The scar tree has considerable research value as it reveals systems of Aboriginal culture and communication that have been forgotten or lost over time. It alludes to a system of marking boundaries and the land ownership structures of the Aboriginal people at Liverpool at a time when that place was the frontier of colonial settlement. Its removal from its context is also symbolic of European notions of collecting and categorising Aboriginal material culture.

The scar tree is provenanced to the Liverpool area but we do not know the site from where it was collected from.

The scar tree is one of many Aboriginal scar trees surviving. Most of them are in the rural areas surrounding the city and suburbs, but many still exist in urban areas.

The scar tree provides considerable potential to interpret the themes of British exploration and colonial expansion into the Pacific as well as the experience of Aboriginal people in the settlement of their lands from 1788. The scar tree provides a challenge to the official British decree to claim Aboriginal lands and administer them without acknowledgement of prior ownership or use.