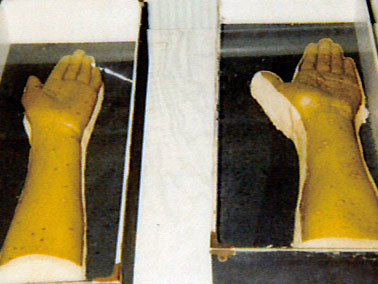 Object Description
The casts are mounted on black felt in sealed wood display boxes with glass fonts. The wax has been painted yellow to resemble the jaundiced appearance of smallpox suffers and the pox markings have been highlighted in pink/red paint to resemble the inflammation of the actual condition. The wax casts are in very good condition, but are extremely fragile. Dimensions 400mm long x 200mm wide x 120mm high.

The North Head Quarantine Station occupies the first site officially designated as a place of quarantine for people entering Australia. It is the oldest, largest and most intact facility of its type. The Station’s function remained unchanged from 1828 to 1984 and all buildings and developments illustrate the changing social and scientific demands of quarantine during that period. Of the approximate 380 people buried at the North Head Quarantine Station during the nineteenth century nearly all were immigrants.

As such the North Head Quarantine Station demonstrates a number of leading themes of Australian history: its development as an independent nation, relying on a growing workforce for labour and to provide markets; the importance of immigration to this process; major developments in public health and science in the 19th and 20th centuries and changing social and racial attitudes in Australian society. 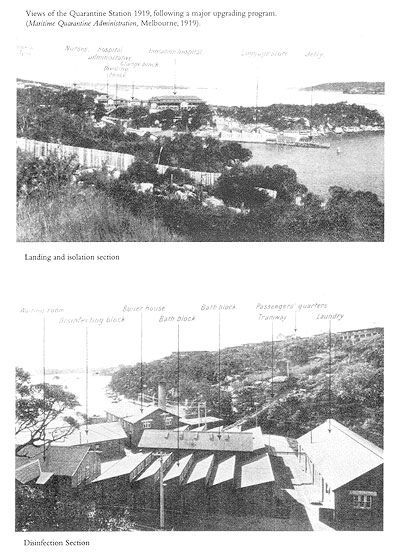 The North Head Quarantine Station symbolises the distance travelled, and the perils faced, by many immigrants, who first stood on Australian soil at the Quarantine Station. It has further social significance because of the role it played, and the importance of this role in the public mind, in safeguarding the nation from hazardous disease. It also has special value for members of the community who were detained there, or whose relatives lived and died there.

The surviving fabric of the place and the movable heritage collections provide information on operation of the North Head Quarantine Station, the emotional ties of former internees and our knowledge of its history.

The wax casts are historically significant because they interpret the story and provide evidence of the experience of those quarantined at the North Head Quarantine Station. They are evidence of a time when migration was a gamble of ship wreck, illness and the exploitation of merciless ship owners who saw the migrant s as mere cargo to claim transport fees and arrival bonuses.

The wax casts have an aesthetic significance in the meticulous casting and manufacture in bees wax and ink. They display a fine detail on reproducing the tell tale pox pustules of the small pox sufferers. It is an example of late nineteenth century artistry and medical education before audio visual and computer graphics.

The wax casts have significance as a research tool for historians to explore the migration, quarantine and infectious disease chapter of Australian history and give the story a wider meaning in the context of the history of migration and settlement of Australia. The movable heritage of the North Head Quarantine Station Collection reveals of the diverse skills and backgrounds of the people who worked and were interned there. Medical staff included doctors, nurses, lecturers, administration staff and police. The internees range from poor and desperate immigrants, ships crew and officers from all over the world, stowaways and refugees. People from every conceivable region and economic stratum of the globe were quarantined as infectious disease is indiscriminate. The fabric and the movable heritage of the place reveal how the station operated and how quarantine methods changed over time with the evolution of modern science and medicine.

The building fabric and the movable heritage of the Quarantine Station are significant in social value. Internees and medial staff families have a common link to the place and many local residents have developed a strong attachment to the place. Many local residents are collectors and amateur historians carrying out many years of research and documenting the history of the place and the Collection. Many former staff and internees still visit the place to salve difficult memories and the mixed emotions they experienced there.

The wax casts of the arms of a small pox suffer come from the School of Tropical Health and Medicine: Sydney University. The casts and a collection of other health teaching objects were transferred to and displayed at the North Head Quarantine Station in the 1970s- 1980s. In 1985 New South Wales National Parks & Wildlife Service took over the management of the place where it deteriorated significantly. Between 1985 and 2002 the wax casts were on permanent display. In 2002 the casts were replaced with polyurethane reproductions and they transferred to long term on site storage. In 2006 the station was leased on a long term basis to Mawland Group for commercial hotel operation.

The wax casts represents the precarious nature of migration in the 19th and early 20th centuries. The wax casts work as a symbol of the exploitative practices of ship owners who ran the disease ridden migrant ships.

The condition of the object is good. It is significant that such an object remains in good condition, intact and at the place it has an historical association.

The wax casts are significant for their potential to interpret the place, their function in research and teaching of infectious disease medicine, quarantine and the experience of migrant communities. The Collection presents the opportunity to interpret the stories of various individuals who were interred at the Quarantine Station and those who worked there.