Object/Collection Description
Stainless steel syrup dispenser, made in about 1938 or 1939. It takes the form of a rectangular steel box, with six curved lids along the front and open along the back. On each lid is a round ceramic handle labelled with one of the syrup flavours: from left to right, Sarsaparilla, Hop Ale, Cherry, Ginger Ale, Ginger Beer and Lime Juice. Inside the box are six square ceramic containers for the syrups, sitting on a sloping shelf so that they are tilted towards the front of the dispenser. Four of the original syrup ladles sit inside four of the ceramic containers. They have shallow round bowls and long handles with curved ends that fit over the wider front edges of the ceramic containers. Two of the ceramic containers are cracked, and one of them has a piece broken off the top edge. Dimensions: Syrup dispenser: height 300 mm, width 750 mm, depth 400 mm. Ceramic containers: height 200 mm, width 130 mm, depth 130 mm. Ladles: length of handle 180 mm, diameter of bowl 57 mm. 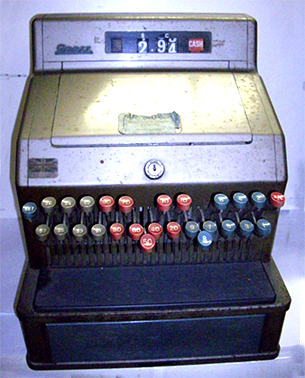 Gross cash register was made in England and converted from sterling to decimal currency for use in Australia. In the base is a cash drawer with compartments for notes and coins. Above the drawer on the front of the machine are two rows of thirteen round keys. The top row has three grey keys numbered $6, $4, $2, five red keys (cents) numbered 90, 70 50 30 10, four blue keys numbered 8, 6, 4 and 2 and a red key with the letters N/S. The 50 and 8 keys are stuck in the lower position. The bottom row has four grey keys numbered $7, $5, $3 and $1, four red keys numbered 80, 60 40 and 20, and five blue keys numbered 9, 7, 5, 3 and 1. There is a blue key on the left hand side of these two rows labelled SET. Above the rows of keys is a central lock and a Union Jack sticker. Above this is a torn paper label with the inscription ‘International Business Equipment for sales and service Phone Gold Coast 31 15 43′. At the top of the register is a rectangular glass panel with four sets of numbers showing amounts of individual items and totals and a tab labelled CASH. Above this are the letters $ (above the first two numbers) and c (above the second set of numbers). The same numbers are visible from the back of the register, facing the customer. To the left of the glass panel is a metal plate with the Gross company logo. Dimensions height 440 mm, width 370 mm, depth 395 mm.

In their heyday in the 1940s and 1950s Australian cafes and milk bars adopted the latest American craze for soda fountains. In America soda fountains sprang up in drugstores, ice-cream parlours, candy stores and department stores. In the early twentieth century many soda fountains expanded their menus and became lunch counters, serving light meals as well as ice cream sodas, sundaes and milk shakes. Milk bars and soda fountains served an important social function in both America and Australia, as public spaces where neighbours could socialise and exchange community news and gossip. With the introduction of fast foods, commercial ice creams, and bottled soft drinks, the rise of the motor vehicle and the spread of suburbia, soda fountains began to decline in the cities. But milk bars survived in many Australian country towns well into the second half of the twentieth century.

The Gross cash register was purchased in the early 1960s, and in 1966 it was converted from sterling to decimal currency. Aspa Pouloudis recalls that it was used in the store until the early 1980s. Gross Cash Registers Ltd was founded in London in 1946 by Henry and Sam Gross. The brothers had both studied engineering and in the 1930s set out to invent a cash register that could be easily mass produced. The Second World War put their plans on hold, but they began production of cash registers and adding machines after the end of hostilities. By the late 1950s the company employed over 2,000 people and exported business machines worldwide, including Australia. Britain changed over from sterling to decimal currency in 1971. Henry Gross spent months developing a cash register mechanism that easily switched from £sd to £p, so that companies using them could instantly change over on the big day. This invention resulted in huge orders for the company. It would be interesting to research further the process by which cash registers in Australia, including the Gross cash register from the Tweed Fruit Exchange, were converted to decimal currency in 1966. Gross Cash Registers Ltd continued trading until the early 1970s. Faced with competition from Japanese electronic machines, the company was sold to Chubb.

This syrup dispenser and cash register were used in the Tweed Fruit Exchange in Murwillumbah from the late 1930s until the early 1960s. The Tweed Fruit Exchange had its origins in the Comino brothers’ fruit shop in Main Street. In 1943 Steve and Jack Comino went into partnership with the Varela Brothers, George Nick and Bill. In about 1954 the Varelas bought out the Cominos. The Varelas sold the business in 1984, and it is now run by the Pouloudis family, related by marriage to the Varelas.

The syrup dispenser and cash register are symbols of Australian café culture of the 1940s and 1950s. They derive historic and intangible significance from their association with the Greek owned Tweed Fruit Exchange in Murwillumbah. The changes of ownership of the Tweed Fruit Exchange over the years illustrate the intricate business and family networks that grew up among the Greek community, scattered in country towns across New South Wales and Queensland. The syrup dispenser and cash register reflect the long hours of hard work, solidarity and close family connections that made Greek businesses in New South Wales country towns successful. They bring back memories for the family members and others who worked in the milk bar and fruit and vegetable store for long hours, serving milk shakes, drinks and ice creams, preparing syrups and fresh fruit juices, cleaning, serving in the shop and doing the many other tasks involved in running a family business.

They have intangible significance for the customers of all ages who visited the Tweed Fruit Exchange for a milk shake, catching up on the latest gossip while they waited for the click of the aluminium container as it was put on the mixer and then the whir of the machine as it frothed up the ice cold milk. The cash register has technological significance, as it was converted from sterling to decimal currency in 1966, bridging the transition to decimal currency. This transition also had socio economic and political dimensions, marking a loosening of the ties between Australia and Britain.

Tsicalas, P 2003, Greeks and other Aliens of the Tweed and Brunswick, self published, Murwillumbah.