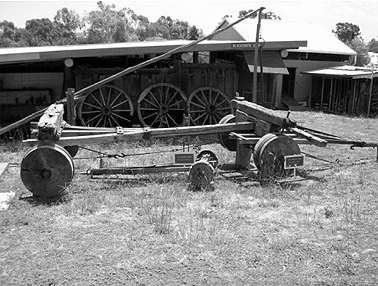 Object Description
Many German migrants living in South Australia and Victoria moved to the Riverina after the1861 Robertson Land Act provided for the selection of land for £1 per acre. In 1858, the town of Holbrook was locally known as ‘the Germans’ and officially changed to ‘Germantown’ in 1876. Communities in the Riverina grew and prospered in the late 19th century and early 20th centuries with the success of the wool and agricultural industries. Jindera, Walla Walla, Gerogery, Milbrulong, Henty and Trungley Hall also maintained Germanic populations.

The jinker is poorly provenanced. It is believed to have been lying on the Westendorf estate since at least the mid-1950s. 1 There is no story of ownership.

Timber jinkers were used to transport timber from the location of harvest to the sawmill or from the sawmill to river for further transport. They were hauled by a team of horses or bullocks. Bullocks were used for hauling loads through slow and difficult terrain and it is likely that they were used to haul the loads of timber in the forest setting for this reason.

The jinkers were constructed from red gum. According to Geoff Evans, a saw miller from Echuca, the solid wheels of the old buggies such as that found at Pinehurst would have been constructed with tools such as an axe, cross-cut saw and chisel, rather than the lathe used by Toby Thompson. They were, he said, ‘a work of art’. 2 According to Geoff, the metal strips sometimes found on the wheels were applied only when the wheels started to crack.

The jinker is historically significant as a tangible link to the early timber clearing and milling activities which occurred in the Currawarna/Berry Jerry area before the effective regulation of timber cutting and sawmill licences in the early 20th century. A number of temporary sawmills are known to have existed in the area. Some of the old parish maps note their locations.

It is interesting to note that Hawkins Sawpit was located adjacent to a Westendorf owned property.3 Land clearing was a standard practice in the Riverina during the late 19th and early 20th centuries. German family histories include documentation of farming practices of that period and the clearing of farming land is included. Jindera, Walla Walla, Henty, Pleasant Hills, Milbrulong, Lockhart, Trungley Hall, Ganmain and Coolamon are among the areas where the clearing of timber was undertaken. It is also well documented that nothing went to waste. Often a convenient means of added income, cleared timber was sold to local sawmills and used for fencing and building purposes. At times, the timber was also donated when cleared from landholders’ properties and used in the construction of public buildings, such as churches and schools.

The proximity of the jinker to the Berry Jerry Forest would suggest it might have been used in this vicinity to transport red gum from the forest to the sawmill or from the sawmill to the Murrumbidgee River. The jinker is poorly provenanced. It is believed to have been lying on the Westendorf estate since at least the mid-1950s. 4 There is no history of ownership.

The jinker is rare. There are several timber jinkers in museums around Australia, however, this is the only known example from the Currawarna area, or indeed, the wider Wagga Wagga district.

The jinker is a representative example of an animal-drawn log trolley used on the sandy soil of riverbanks in inland New South Wales and Victoria.

The jinker is in good condition, but the restoration work which was undertaken in the mid-1980s undermines its heritage value to some extent.

The jinker is significant for its ability to interpret the timber getting industry before the beginnings of the NSW Forestry Department. It also interprets the practice of land clearing, including the clearing undertaken by German farmers, which occurred in the Wagga Wagga district. In this way it can be seen to have a profound connection with environmental issues such as salinity which face the district today.