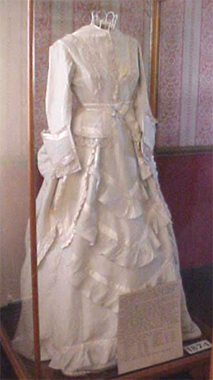 Object Description
The wedding gown was manufactured from pale blue silk and is trimmed with hand crocheted lace. The gown was imported from France for Gertrude Pabst and Maurice Purtell c.1874. The machine and hand stitched, silk gown has faded to a creamy colour. There is also evidence of tearing and shattering of the silk fibres, particularly at the cuff and hemline areas of the gown. The gown is in fair to good condition, considering the age and fragile nature of the silk fabric. Dimensions: Approx 1300mm high x 500mm wide.

Johann Christopher Pabst came to Australia in 1825, under contract as a shepherd to the Australian Agricultural Company. 1 The Australian Agricultural Company was established as a land development company in 1824. Originally formed to extend and improve the flocks of Merino sheep, Pabst, along with other shepherds were recruited from Saxony. The AAC were aware of the high success rate of the Saxony sheep farmers. Sheep from Saxony were also purchased by the AAC for cross breeding with existing Merino sheep in New South Wales. At the completion of his indenture with the AAC, Pabst moved to the Germanton area of the Riverina. Pabst became a well known land holder and publican and the area was known to locals and travellers as ‘The German’s’ or ‘German’s Flat’, which eventually became Germanton. The name of Germanton was officially changed to Holbrook in 1915, due to the strong anti-German sentiments generated by World War I.

Pabst became a successful businessman and licensee of the ‘Woolpack Inn’ at Ten Mile Creek (Germanton) in 1840. At that time it was the only building where the town of Holbrook now stands. Because of the difficulty of pronouncing the name ‘Pabst’, the area of the ‘Woolpack Inn’ was referred to by locals and travellers passing through, as ‘John the German’s’ or ‘The German’s’ or ‘German’s Flat. This common usage then evolved into the place name, Germanton. With strong anti-German sentiments abounding during WWI, the name of Germanton was changed to Holbrook in 1915. 2

Johan Pabst was also a prominent figure in local community activities including horse racing, with the Border Post of February 1875 listing him among stewards at the Ten Mile Creek race meeting.

John Purtle (Purtell) arrived in the Sydney as a convict on board the Mangles in 1822. He had been sentenced at Limerick to seven years transportation. Purtell received his ticket of leave on 21 March 1827. In 1828, Purtell was employed as a stockman and shepherd at Camden. By 1858, Purtell had built, and was operating, the ‘Criterion Hotel’ in Germanton. 3

The Purtell family was also involved in community affairs, with John Purtell’s sons, William and Maurice, listed as stewards of the Ten Mile Creek Races in February of 1875.

The economic and social rise of both the Pabst and Purtell families was typical of many migrant and convict families of the nineteenth century. The marriage of their children, Mary Gertrude Pabst and Maurice Purtell in 1874, saw the union of two of the founding families of the Ten Mile Creek (Germanton) area.

During the cold winter months and prior to a wedding, a popular night time activity was feather picking or federschleissen. Young people would gather to strip the hard central shaft from feathers kept from chickens, ducks and geese. The stripped feathers were then used to fill a quilt and presented to the bride to be. Dancing, music and a supper of streusel kuchen completed the evening. It was often the beginning of relationships between other young couples. 4

On the night before a wedding, young local men would gather at the bride’s home for the ritual of tin kettling (polterabend). First, making sure that all the horses had been led a safe distance away and securely tied, lengths of iron, empty kerosene tins and cow bells would be banged and rattled and shot guns would be fired in the air. The rowdy group would then be invited into the brides home for glasses of home made wine and cake (streusel kuchen). 5

Maurice Purtell and Mary Gertrude Pabst were married at Ten Mile Creek on 27 December, 1874. According to their marriage certificate, they were married according to ‘the rite of the Church of Rome’. Maurice’s usual occupation was listed as ‘farmer’ and Mary Gertrude at that time was ‘living with friends’. The officiating minister was William Bermingham and the witnesses were William Purtell, the groom’s brother and Mary Ignatius Garry. Maurice and Mary Gertrude had ten children: Maurice, Alma, Cyril, Ivan, Doris, Patrick, Frederick, Leslie, Mary and Aloysius.

During the 19th century the colonies depended heavily on imported clothing, just as Australia does today. British made goods were in particularly high demand, but by the end of the century American shoes, French and German fancy accessories, haberdashery and other specialist items frequently supplanted British made items. 6

By the 1850s an increasing variety of imported, readymade garments for women could be purchased in Australia. Most of these garments were informal, outerwear or leisure garments and there was little in the way of stylish gowns. Part-made evening and walking gowns (the skirts readymade) and some made-up gowns were also available. 7

Clothing retailed in Australia in urban and country areas were a mixture of locally made garments and imported goods. The wedding gown of Mary Gertrude Pabst is said to have been imported from France.

Originally engaged in the agricultural industry, both the Pabst and Purcell families also became well known in the district for their connection to business pursuits. In particular, the Pabst family was well known in the hotel trade of the Germanton area. Both John Purtell and John Pabst were also highly respected as supporters and benefactors of local sporting and cultural events, such as the annual Germanton horse racing carnival.

The marriage of Gertrude Pabst and Maurice Purtell was no doubt one of the social highlights of the year in the Germanton area. Only the very best was sought after for Gertrude’s wedding finery and the services of a local dressmaker would not have been considered.

Dressed in her expensive and stylish, French designed and made wedding gown, Gertrude Pabst reflected both the business success and social standing of her father, John (Johann) Pabst. 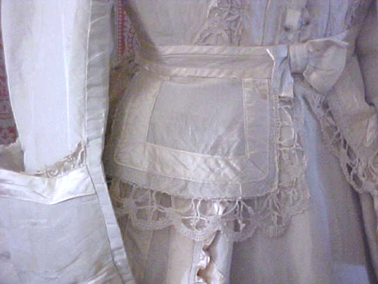 The wedding gown provides an historical link to the family of John Purtell, and in particular, his son Maurice. The Purtell family was also a founding pioneer family in the Germanton district, with connections to both agricultural and commercial interests of the area.

The wedding gown is provenanced and in good original condition and is of historic significance as an object directly related to the family of Johan Christopher Pabst, and in particular, his daughter, Mary Gertrude.

Worn by Mary Gertrude Pabst at her marriage to Maurice Purtell in 1875, the gown provides a tangible link to the nineteenth century fashion and retailing industry, both overseas and in Australia. The wedding gown is also a historically significant object in the interpretation of wedding rituals of the nineteenth century, particularly among German migrants.