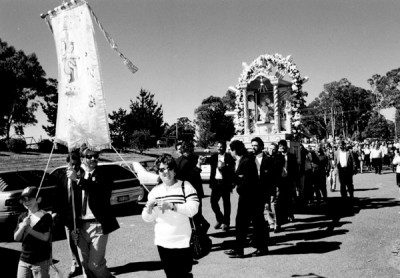 The Church was the focal point of each Italian town and the priest was involved in the full parochial life of his parishioners. In Australia, the Church became aware of the need for Italian speaking clergy and sourced priests from Italy.

The Capuchins, a form of Franciscan friars, were based at St. Fiacre’s in Leichhardt (1946) and visited Italians in hospitals and worksites throughout NSW. The Capuchins would often go to disembarkation points, welcome the new arrivals and offer their help. Enterprising Capuchins such as Frs. Anastasio Paoletti, Silvio Spighi, Alfonso Panciroli and Atanasio Gonelli are well remembered by the Italian community.

The Scalabrinians are an order of missionary priests whose apostolate is specifically to assist migrants. They first arrived in Unanderra (near Wollongong) in 1952 and built an Italian Centre in 1955 containing recreation rooms, a library where English classes were held. Later in 1957, they opened a parish and Italian Centre in Albion Street, Surry Hills. Since the 1970s, the Scalabrinian fathers have been providing aged care facilities specifically for Italians.

The Benedictines were also responsible for the care of Italian Electric Power Transmission (EPT) workers at Marayong. The workers constructed their own church, St. Anthony’s, and it contains a memorial to all those killed in work-related accidents.

Courtesy of the Puglisi family

Musicians playing traditional instruments for the Festa of Our Lady of Graces Sinopoli Association. Courtesy of Rocco Leonello