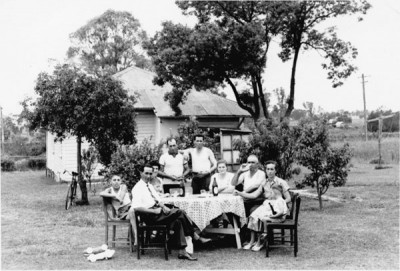 The family and its associated rituals were and still are today, the basis of Italian life. While Italian migrants worked extremely long hours, Sunday was reserved as a day to spend with the family.

Most family rituals surrounded a ‘festa’ or celebration. Religious rites-of-passage such as baptisms, communions, confirmations and weddings involved huge parties where nonne (grandmothers) and zie (aunts) would be involved making garments and food. Families would work embroidering a bride’s dowry of sheets, pillowcases and towels. Many Italian women were also married by proxy in Italy and arrived in Australia to meet their husband and begin married life. Most of the family rituals concerned making food. In the 1950s Australians had not been exposed to European food and it was difficult to obtain products such as olive oil or pasta. Italians continued making their own delicacies, something they had been doing for centuries in Italy.

One of the most common rituals was making ‘passata’, tomato sauce used for pasta. For many Italians, especially those living in rural areas, ‘Salame Day’ was another annual event. A pig would be raised for several months and then slaughtered to make salame, pancetta, prosciutto and coppa. Similarly, wine and grappa were commonly made by Italian migrants.

The Italian backyard was also the place where Italian style vegetables and fruits were grown. Vegetables such as zucchini, eggplants, capsicums and borlotti beans were grown as they were unheard of in Australia during the 1950s. Similarly, most Italian backyards had fig trees, fici d’India (prickly pears) and sometimes, olive trees.

“It was hard to have Teresa Valzano in her home in Wyangala Dam in Cowra, NSW showing off her stock of ‘la passata e i pelati’ November 1966. Courtesy of the Valzano family