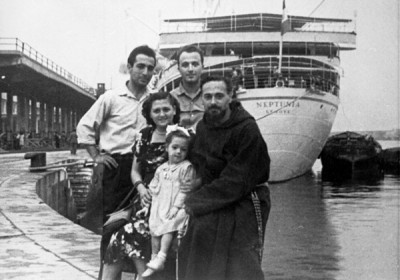 Since the nineteenth century, chain migration, a system of self-funded migration, was Italians’ primary mode of entry into Australia. Chain migration involved people from a particular town or paese settling in the same place in Australia. Migrants did this as a form of security to ease their transition as new arrivals.

Migration was an arduous, emotional and expensive process. Shipping fares were expensive; in 1948 a third class passage was 202 pounds, the equivalent of an executive’s wage. Usually the father came to Australia, often with a brother or paesano, found work, settled and raised funds to cover fares to be sent to Italy for other relatives. This process often separated families for five, ten or in some cases, twenty years. An Assisted Passage Scheme was introduced in 1951, whereby the Australian Government paid for fares and accommodation (in migrant camps such as Bonegilla and Greta) in return for several years of employment. Between 1951–1968 over 42,000 Italians arrived under this scheme.

Prior to migration, most Italians would not have been outside their own village precinct. Most journeyed to their point of embarkation by cart, train or boat, usually to Genoa or Messina, carrying all their possessions in a wooden trunk. The journey took from six to eight weeks via the Suez Canal and the first stop in Australia was Perth, followed by Melbourne and Sydney. Family, Italian priests and representative from Italian organisations were often waiting at disembarkation points when migrant ships arrived.

Courtesy of the Fin family