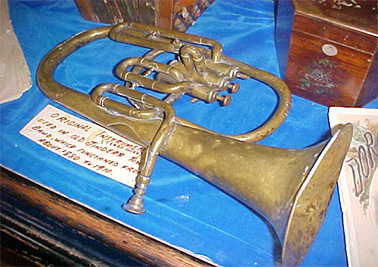 Object Description
Many German migrants living in South Australia and Victoria moved to the Riverina after the1861 Robertson Land Act provided for the selection of land for £1 per acre. In 1858, the town of Holbrook was locally known as ‘the Germans’ and officially changed to ‘Germantown’ in 1876. Communities in the Riverina grew and prospered in the late 19th and early 20th centuries with the success of the wool and agricultural industries. Jindera, Walla Walla, Gerogery, Milbrulong, Henty and Trungley Hall also maintained Germanic populations.

Music was one of the most popular recreational activities of the early German immigrants in South Australia. Singing groups, known as Liedertafel, were formed, the first in Adelaide in 1858. Other Liedertafel groups followed, including Tanunda in the Barossa Valley, in 1862. Both these groups still exist. 1

Brass bands were common in Australian country towns in the 19th and early 20th centuries and were not just a German recreational activity. A traditional brass band is made up of 27 musicians who play three basic types of instruments: a valved metal wind instrument, the trombone and percussion. A brass band may consist of combinations of the following instruments: soprano cornet, cornet, flugel horn, tenor horn, baritone horn, euphonium, trombone, tuba and percussion (drums, triangle and cymbals).

The Jindera Brass Band tenor horn is associated with the second phase of German settlement in the Riverina. Historic photographs of the band are labelled with the members’ names, showing that most of the men were German or of Germanic descent. During the second phase of settlement, communities and towns were established. It was also during this second phase that community infrastructure, such as sporting clubs and cultural groups, were established. Bands and other musical groups formed a valuable facet of cultural life in the German towns and communities. The bands continued a strong musical tradition which had been established in the South Australian German communities.

Most 19th century German settlements of a reasonable size boasted a brass band. It was also the usual practice for girls to learn the piano and boys to learn brass instruments. 2

Musical skills and appreciation accompanied the migration of German settlers into the Riverina district of NSW. Small, portable instruments such as violins, cornets and button accordions were possibly carried on the long trek from South Australia or purchased after settlement. The larger instruments, such as pianos and organs, arrived much later. They were sent by river steamer, along with large items of household furniture and agricultural equipment.

Organ music played the central role in religious services throughout the German communities in the Riverina, but other instruments were also used. For many years musical accompaniment at the Bethlehem Lutheran Church in Milbrulong was supplied by the choir, with the addition of organ and violins. The choir and musicians were placed in a raised gallery, which still remains in perfect condition. At the Trungley Hall Lutheran Church hymns were usually accompanied by the organ, with Albert Krause taking part on his violin on many occasions. If the sermon was getting too long, Albert would start tuning up his violin! 3 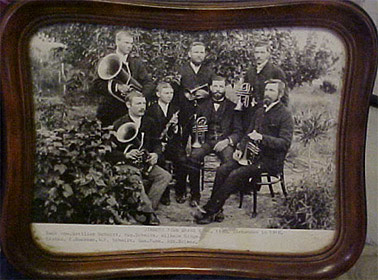 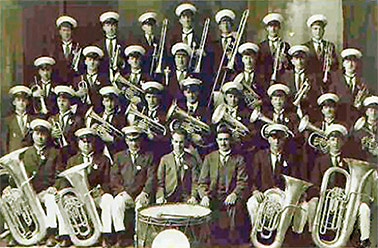 The tenor horn is historically significant for its associations with the second phase of settlement by German settlers in the Riverina and the Jindera Brass Band. During this second phase of settlement, towns and communities were established. Following the establishment of towns in the Riverina, sporting and cultural groups were also established. Brass bands and other musical groups were among the cultural groups founded. The tenor horn is associated with the leisure pursuits of German communities and individuals in the Riverina. Music played an important role in these communities and continued a musical tradition carried from the German communities in South Australia and previously from the various provinces of Germany itself.

The horn has aesthetic significance. It is the smallest of the tuba-like instruments, as its bell points upwards when played, rather than forward like a cornet. It is tuned in the key of E flat and provides the musical link between the melody and counter melody in many pieces. It can also be used as a solo instrument, where its mellow sound is supported by soft chording from the rest of the band. 4

The horn is provenanced and in good original condition. The horn has interpretive potential for the themes of German settlement in the Riverina, and the establishment of communities and leisure activities among German settlers and in NSW country towns.

The tenor horn plays an important role in the interpretation of community and leisure activities in the German settlements of the Riverina and the late 19th century and early 20th century history of brass bands in NSW country towns.

4 www.harrogate.co.uk/harrogate-band/misc07.htm
‘What is a Brass Band?’

Researched and written by Annette Brown
Museum of the Riverina, Wagga Wagga
October 2005