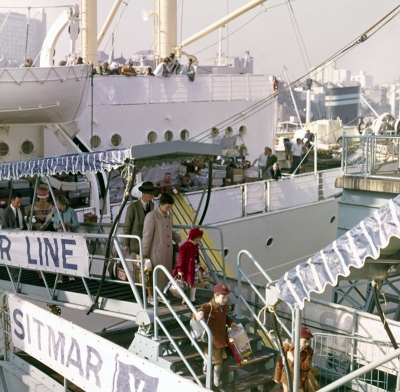 Between 1945 and 1965 more than two million migrants came to Australia. Most were assisted: the Commonwealth Government paid most of their fare to get to Australia. In return they had to stay in Australia for at least two years and work in whatever jobs the Government gave them. 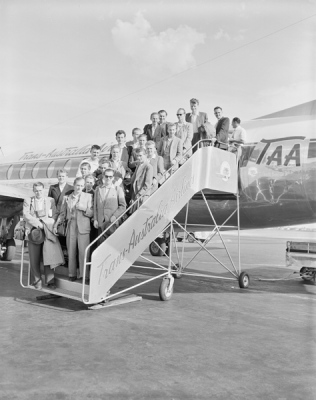 German migrants arrive onboard a T.A.A. Viscount flight, c.1956. These migrants flew from Hamburg, Germany, under the assisted passage scheme sponsored by the Inter-governmental Committee for European Migration. Courtesy National Archives of Australia

The first wave of post war migration began with Displaced Persons. These people fled their countries which had been utterly destroyed by war or overran by the Soviet Union. Between 1947 and 1953 the Australian Government assisted over 170,000 Displaced Persons to migrate to Australia. 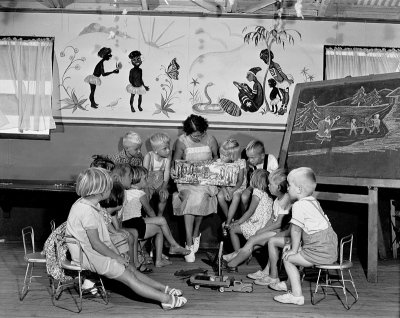 The second wave of post-war immigration arrived in the 1950s and 1960s, and consisted of those seeking employment and better living conditions. These programs were an enormous success. 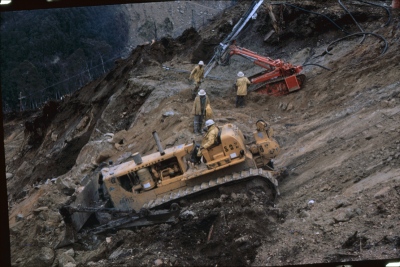 A number of migrants spent their first months in Australia living in migrant hostels while they tried to find themselves a home. Some found work on the Snowy Mountains Hydro Electric Scheme, others in factories and others did the hard and dirty jobs in heavy industry. Skilled migrants found it hard to find work to suit their training and qualifications and had to accept what work was available. All migrants, especially those who did not speak English well, had to put up with prejudice. 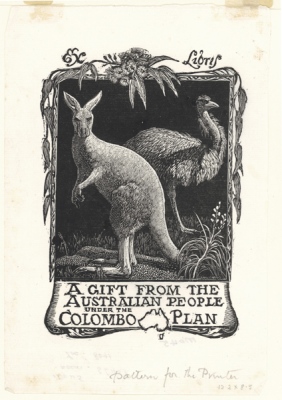 A Gift from the Australian People under the Colombo Plan, Lionel Lindsay, 1954, Courtesy National Library of Australia

The Colombo Plan was started in 1951 by the Commonwealth of Nations so that developed countries of the Commonwealth could help the less developed ones. The Australian Government also promoted the Plan to improve its relationships with Asian countries and dispel negative impressions caused by the White Australia Policy. Later, many non-Commonwealth countries joined the Plan. The six countries supplying aid to 20 developing countries were Australia, New Zealand, Canada, Britain, Japan and the United States. The countries that received aid included Bangladesh, India, Indonesia, Laos, Malaysia, Pakistan and Thailand.

The rich countries provided grants and loans to help the other countries develop their industry and agriculture. In 1983 Australia gave $59 million in aid to support the Colombo Plan. Students from developing countries were brought to Australia to study. When they had finished their studies they returned to use the skills and knowledge they had acquired to help their own people. In 1986 there were 3500 foreign students and trainees whose studies and living costs were paid for by the Australian Government.

1950 - 1960 Westbridge Migrant Hostel Bassinette
The first major post-war wave of migration started with displaced persons. These people had fled their countries of birth due to war, dislocation...
more details »

1946 Griffith Cottage Industry Textiles Collection
This cottage industry textiles collection from Griffith is of historic significance as a family craft handed down from mother to daughter.
more details »
View other objects from this era »